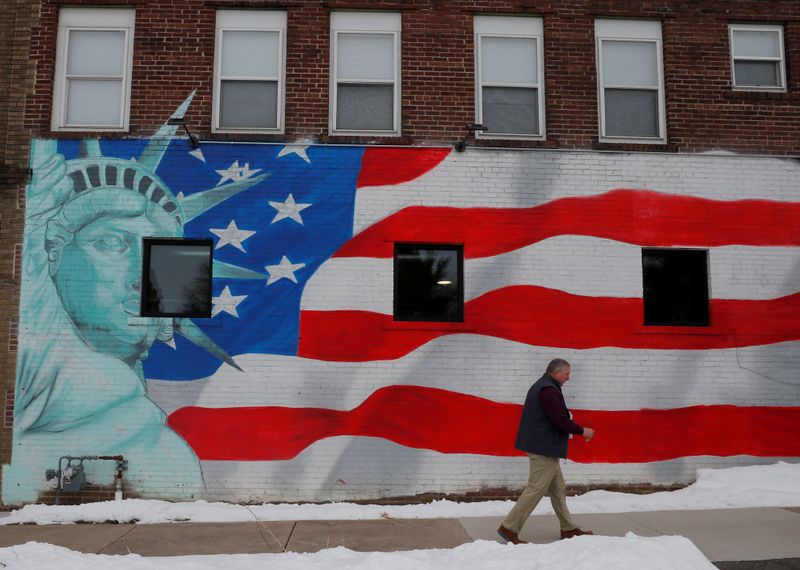 WASHINGTON (Reuters) – Record-low U.S. unemployment, booming equity markets, and continued economic growth may have given President Donald Trump a head start toward reelection, but new analysis of past voting and economic trends in key states suggests the margin is “razor thin” and could be upended by strong turnout among Democrats.

Oxford Economics used state-level economic data and past election results to predict how each state may vote in the November election.

If past patterns hold, some industrial states may be poised to reverse their unexpected support of Trump in 2016 and vote Democratic. Trump still holds a 274 to 264 vote lead in the electoral college, the study found – but that is substantially narrower than his 304 to 227 electoral vote win over Democrat Hillary Clinton, and based on the study’s findings could be easily upended.

“Assuming average turnouts, economic conditions would lead to more votes in favor of the Democratic candidate in states like Michigan, Ohio and Pennsylvania,” where a slump in manufacturing, for example, has been felt more sharply than in traditional Democratic strongholds like California and New York whose economies are more service-oriented, said Gregory Daco, Oxford Economics chief U.S. economist.

The manufacturing sector, a focus of Trump’s trade wars with China and other countries, added about half a million jobs in the first two years of Trump’s tenure, but flatlined in 2019. The current unemployment rates in Ohio and Pennsylvania, at 4.2% and 4.5% respectively, are higher than the 3.5% national average touted by Trump.

An uptick in Democratic turnout or a slide in the economy could change the outcome dramatically.

Based on past presidential elections, even a “modest” boost in Democratic voter turnout of 1 to 4 percentage points would lead to a Democratic sweep of battleground states and an overwhelming Trump defeat, the Oxford Economics paper estimated. The model, which looks not at national vote totals but at the state-by-state outcomes which actually determine the presidency through the electoral college, correctly parsed the outcome in eight of the 10 elections from 1980.

The model does not control for some key elements, including Trump’s ability to motivate high turnout among his own loyalists, or the effectiveness of an eventual Democratic candidate to mobilize the party’s voters in key locations.

It also may miss recent trend shifts – the rising political influence of northern Virginia and its white-collar economy, for example, in winning the state for Clinton in 2016 and in recently electing a Democratic governor and state legislature. On the basis of recent economic trends, the Oxford analysis sees Virginia leaning to Trump.

But it does point to an important unknown about the 2020 election: how much a relatively strong and stable economy, one of Trump’s chief talking points, will matter in the November vote.

Though unemployment is at a historic low, Trump’s disapproval ratings are high, and he trails the chief Democratic hopefuls in recent national polls.

Many of the country’s economic gains in recent years have flowed to Democratic-leaning urban areas, not the heartland towns that form Trump’s core constituency.